Schrader Funeral Home is located in the west St. Louis suburb of Ballwin and is St. Louis’ oldest, family-owned funeral home. The business was founded in 1868 by Frederick Schrader in a building just a few hundred yards from the current location. Over the intervening 136 years, the community of Ballwin has grown to more than 22,000 residents, and the funeral home has grown and prospered as a result of the support of the community. Frederick Schrader immigrated from Hanover, Germany to the Ballwin area in 1846. A carpenter and furniture maker by trade, his expansion in 1868 into the business of crafting caskets for his neighbors was a natural. As things often go, one thing led to another. Soon he and his son, William Schrader were providing not only burial caskets but also horse-drawn hearses and carriages for funerals, as well as running the family furniture business. The current location of Schrader Funeral Home is a building that dates from about 1910, according to historical documents. The previous structure was sold to the Ballwin Mutual Telephone Company, a new enterprise that needed a centrally located office. The 1910 Schrader building is still intact with several additions, including the 1990 atrium addition, surrounding it. In the early 1900s, William Schrader crafted a hearse body for a motorized vehicle. In a newspaper article from the 1920s, the 1914 motor hearse with custom body is referred to as, ‘. . . one of the finest in the county.’ By this time, William had graduated from both the Pennsylvania College of Embalming in 1897, and the Champion College of Embalming. He received Missouri embalmer license number 432 on May 13, 1899. The third generation of Schrader family funeral directors was Harry F. Schrader, who saw the evolution of the funeral business from a small business in the 1920s to a large-volume, full-fledged funeral home of the 1960s at his retirement. Today, his children, Harold A. ‘Skip’ Schrader and Ruth Schrader Arft are fourth-generation owners and funeral directors. Ruth’s late husband, Henry ‘Hank’ Arft, a former professional baseball player with the St. Louis Browns was active in the business for over fifty years. The fifth generation of Schraders, Steven Schrader and his wife, Cathy, and Peggy Arft-Goethe and her husband, Dennis Goethe, are very involved in community affairs and in the day-to-day management of the funeral home. The very first thing you’ll notice about Schrader Funeral Home & Crematory in Ballwin is the stunning setting of the funeral home. Although Schrader is on a busy major highway in west St. Louis County, Missouri, the Schrader family has built the funeral home amidst peaceful green lawns and award-winning flower gardens and landscaping. Many people recognize us by the huge bed of beautiful flowers (usually impatiens) in the front of the building, offering those who stop at the Holloway Road traffic signal in front of the funeral home a moment of peaceful reflection in our busy world. From the large and grand Williamsburg Room, to the comfort of the Rose Room and Wedgwood Room, from the intimate setting of the Canterbury Room to the dignity of the formal chapel, you will find that Schrader really is a funeral “home;” a comfortable place with helpful and friendly people to make sure that everything is just the way you want it. Our Family Center, a large reception center on the Ballwin campus, is large enough to accommodate family meals before or after the funeral or memorial service. And our on-site crematory assures your family that the deceased never leaves our care. Everything is done right here, supervised by trained Schrader staff members. 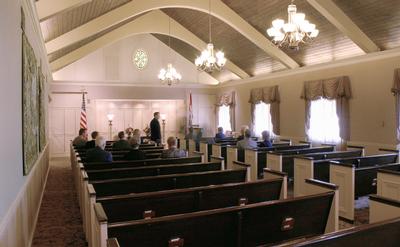