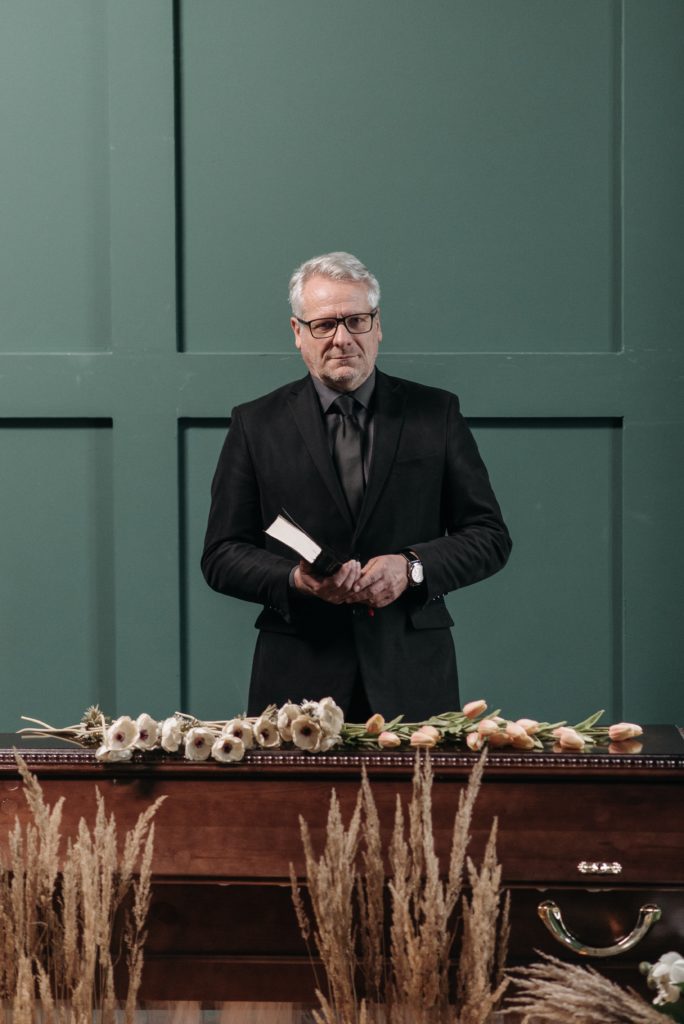 The funeral officiant fee is called an Honorarium—a monetary way of honoring them for their participation in the funeral. In many ways, an honorarium is similar to a speaker fee, but with added significance and duties.

There is certainly a sliding scale in terms of honorariums and sometimes, pastors do not charge at all, but all seem to welcome a donation to their congregation or church.

Speaking from my experience of being on both sides of the arrangement table—both as a survivor of the deceased and now as a licensed funeral director—discussing how much services cost may be one of the worst parts of the process. Thankfully, the costs associated with officiants can be one of the easier to figure out.

No one enjoys discussing money, particularly during such an emotional, sensitive time as planning a loved one’s funeral. One of the more awkward questions involved with planning a funeral is how much you should pay a pastor, rabbi, priest, or Life Celebrant to officiate a funeral service.

Among the various religions, Protestant Christian pastors are some of the least expensive, normally requiring an honorarium payment between $100 to $300.

Episcopalian and Anglican churches can often be found somewhere in the middle between Protestant and Catholic ministries, and what their priests expect their clergy honorarium to reflect that.

However, if funerals are held in a church during Mass there will likely be additional honorarium payment charges for an organist ($200 and up), a cantor ($150 and up), and altar servers ($10-20 apiece).

Nuns do not officiate Catholic funerals at the time this piece is being written, as they do not lead congregations during Mass except under very dire and specific circumstances.

Rabbi Fees Have the Largest Variance

In my years as a funeral director, I’ve witnessed rabbis’ charges vary the greatest, from $200 to $1200 per service, but they are the most helpful as they will tell you what their charges are.

Life Celebrants can be easy to hire as they have set charges for their wedding services and often funeral services readily available in pamphlets or on their websites.

Avoid Having a Family Member Serve as Officiant

Many faiths allow for the possibility of a family member to act as the officiate a funeral. This can be particularly viable for families looking to save the family the cost of an honorarium. But not every family has that strong member able to stand up, give a eulogy, and lead prayers. This is public speaking at both its best and worst.

Having given my own father’s eulogy in church, I can attest to how difficult it is to be both a family member and an officiate.  I recall trying to gulp air into my lungs and not rocking to-and-fro while crying hard. Giving a proper eulogy for a family member is incredibly difficult when you are caught up in the personal emotion of the moment.

My suggestion is that unless there is this incredibly strong and confident family member who volunteers to act as officiant, take the time to choose a professional to take the stress off the rest of your family.

Perhaps you are wondering what an officiant does as part of their services to your family during a funeral. First, they lead the service, taking that pressure off family members who may be too weakened by grief the day of the funeral.

Officiants perform the religious rites expected of the deceased’s faith, saying prayers, and singing songs which have comforted the family for generations. Officiants keep everything cohesive and the service will run more smoothly under their direction.

Where Does the Honorarium Payment Go?

There are the rules of etiquette surrounding how and when to pay a pastor for their funeral service.

If the funeral director has already received the cost information for the family, it is very easy for them to include those charges on the final contract under Cash Advanced Items. For most funeral homes, a credit card can be used to pay for all the services easily at this time.

Then, it is the director who will have to apportion payments and their responsibility to distribute them properly.

If a family wants to pay the officiants directly, it should be discussed between them, the funeral director, AND the officiant so that everyone is on the same page. No one wants to have the “But YOU were supposed to pay them” or the “check is in the mail” conversation ever, much less at the time of the funeral.

When paying an officiant directly, keep in the mind that the chances your officiant has set up a Square account or could take credit cards at the time services are rendered is super rare. In part, this is why it is so much easier for all involved for the funeral director to organize and distribute payments.

When it comes to pastors, priests and rabbis who regularly work with the funeral home you have chosen, the funeral director will either already know what the price for their services are or be able to find out on your behalf very quickly.

I want to reassure everyone that there is never any harm in asking questions, even the hard ones about money.

One thought on “Funeral Officiant Fees”